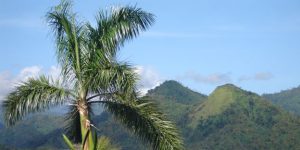 Nanny’s Watch Hill was a focal point. Green and serene, it stands testimony to a free Maroon society. Seemingly sliced in half from its pinnacle to its base, we were led to imagine the tactician and warrior woman, Nanny, at the top, watching the menacing movements of the British Army and strategising.

Red-coated, they were a ready target for her army of Maroon men and women freedom fighters. This account of our history was shared roadside as our convoy was stopped at this vantage point by our host for the day, Donaldson Bernard.

Donaldson, himself is a Maroon. He explained how the use of the Cacoon vine, the first camouflage used in the history of war, helped the Maroons to be victorious, thus ending their 80 years war in a peace treaty with the British in 18th century Jamaica.

Below the road, mature and meandering through lush green valleys, the Rio Grande added to the beauty and serenity of this place. As Donaldson continued his introduction to his homeland, stories of flora and fauna were interwoven into the history, geography and culture of the Maroon society.

Back on our buses, after tasting berries from the overhanging vines, we continued on our way along the Port Antonio to Millbank main road to Windsor Primary School where feasts of various kinds were being prepared for us. 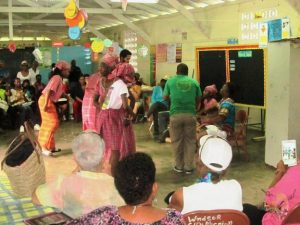 The sound of the abeng welcomed the four score who descended; eager for what was in store. The abeng was blown by the forerunner of the Granny Nanny Maroon Cultural Group, Aaron Ireland. The first feast was Kromanti and Kumina drumming and dance, at the end of which one of the members gave an expose on Maroon history, life and culture; our second feast introduced us to the unique foods being prepared for our lunch — the third.

Meanwhile, bussu and vegetable soups warmed us on that rainy afternoon, and opened our appetites for what was to come. Offerings of a Maroon diet were jerked wild hog (with not an ounce of fat), jerked rabbit, cacoon (the largest bean in the world), thatch (or Heart of Palm). The more familiar mackerel rundung, curried goat,  dasheen, sweet potatoes and yellow yam were also part of the cornucopia. So too, was an offering of green bananas in peanuts by a farm volunteer from The Cameroons.

To walk it all off, some braved the slippery slopes to the RioGran Jamaica Health Farm where Donaldson shared his organic farming techniques, an attraction for many worldwide, especially for volunteers in organic farming from abroad. Attractions offered by the RioGran Jamaica Health farm also include river tubing on the Rio Grande, riverside cookouts and picnics, a half-day trek to the top of Nanny’s Watch Hill led by wild boar hunters of the area, a 3-5 day expedition through jungle terrain to Nanny Town for the very hardy, and cultural presentations by the Granny Nanny Maroon Cultural Group.

It was a quiet journey home; much on which to reflect, and a newfound respect for life in the hills and valleys of Portland. This was community tourism at its best. Presented by the owners of the RioGran Jamaica Health Farm, the day’s event was produced by My Jamaica travels (MJT).

MJT is the umbrella organisation for micro, small and medium-sized entrepreneurs in tourism, with one of its main objectives being to help its members, through various means, to grow and strengthen their businesses. Our quarterly Mix and Mingle is one such method, and is organised by the MJT Board as a networking opportunity where members get to know each other, share information and, in the case of each occasion, the hosts of the Mix and Mingle get to showcase their business.

The March 10 trip to the Rio Grande Valley attracted 80 attendees, many of whom received the invitation through the office of the Caribbean Community of Retired Persons. The others were MJT members and affiliates from across the island, their friends, family and an overseas guest of a bed and breakfast owner. MJT discount partners, Norman Wright of Perishables Jamaica Limited, producers of Tops herbal teas, Ewan McAnuff of McAnuff Art, Jamaican fine artist were also in attendance. Showcased were products from MJT’s newest discount partner, Wilpar Limited, producers of castor oil and honey handcrafted soaps.