Let’s End The Blockade Against Cuba 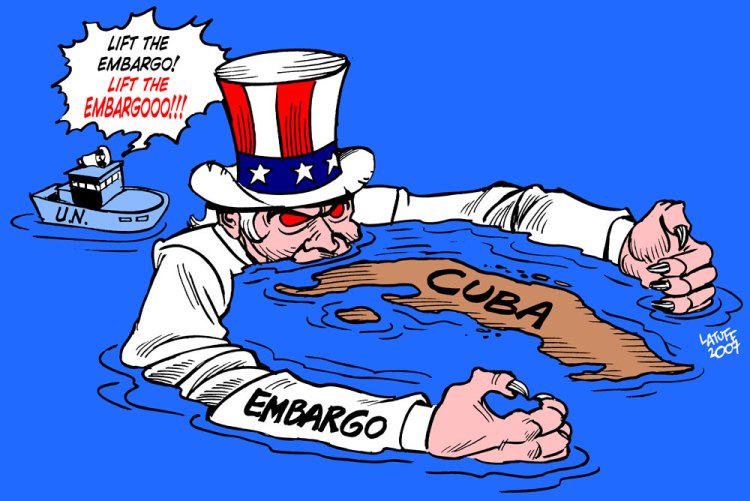 Some persons use the word embargo, but it is a blockade and fits almost every definition of the word. An embargo can be defined as an official ban on trade or other commercial activity with a particular country. A blockade on the other hand can be defined as an act or means of sealing off a place to prevent goods or people from entering or leaving. True, Cuba is officially banned from trading with the US, she will not accept Cuban made goods or personnel nor will she send Cuba goods, remittances, or any other form of trade them being banned from the US banking system. On the face of it so far it is a simple embargo, but as always, the devil is in the detail.

Those who are familiar with the Venezuelan or Iranian situation will understand what I speak of. The US dollar was and remains the currency of international trade and of last resort, all trade in some form or another ends up at some point denominated in USD and as a result, at some point, it falls under US jurisdiction. Being unable to access US dollars or trade in US dollars means being shut out of global trade, it means being forced to trade in your own currency which on the face of it is a good thing but in the end results either in fewer people willing to take the financial risk or unwilling to take the geopolitical risks as engaging in trade with a US blacklisted nation means coming under US secondary sanctions and removes you and your company from trading with US firms.

This is where we see a simple bi-national dispute where one party feels jilted because the other finally wants to stand on their feet (an embargo) becomes a blockade, a dispute which forces the whole world to not engage in trade with that nation or run the gauntlet. Either one is wrong.  No nation should have embargos thrown upon them simply because their people have chosen independence, but a blockade is illegal, it goes against international law (a concept which is fast becoming meaningless if it ever had any). More than being morally repugnant, stinking in the nostrils of any right-thinking individual and even opponent of socialism, I say again it is illegal breaking conventions which the US has signed on to and therefore her law (the constitution states that if the US Congress ratifies a treaty or convention then it is legally binding) costing the lives of countless numbers of Cuban citizens.

This embargo has a monetary cost, of course.  Billions have been lost, meaning that Cuba is nowhere near what her potential says she can be.  But let it not be lost on us that this money as opposed to being used to feather the nests as would be the case in other countries, would have been spent on the people.  In the most literal sense they are depriving these people of food, medicine and in some extreme cases their lives. It is no wonder that this blockade this monstrous unilateral action by the imperial behemoth continues to be decried at the UN even by her allies who though no friends of the Revolution see the futility and needless brutality in maintaining these positions.

The UN will once again be holding a vote in the general assembly about the US blockade against Cuba, and once again the resolution condemning the US and its blockade against Cuba is expected to overwhelmingly pass. The overwhelming majority of the world’s nations condemn the blockade and for good reason knowing all too well that at any minute they too could fall under unilateral US embargos which become a blockade. This as noted before took place with Iran, Venezuela, Syria, Lebanon, Russia and has even been threatened against the Germans as they seek to complete Nord Stream 2.

We the citizens of the world must condemn the blockade and urge our respective governments to do the same at the UN. We must condemn it for the theft for which it is and for the murder which it is and force the US to abandon this route. More than that though, we must urge our governments, especially in the Caribbean, to oppose the blockade and openly trade with Cuba in all areas beneficial to us. If the majority of the world’s nations broke the blockade what could the mighty US do, blockade all member states of the UN? Who would she trade with?  Who would she get her raw materials from, her luxury European cars or even their cheap clothing? As the old saying goes, they cannot kill us all, and it is only up to us to make the first step for us to see that it is true. A simple regional bloc such as CARICOM managed for decades to gum up the works of US regime change in Venezuela, and we benefited greatly with Petro-Caribe, imagine what we could do with Cuba when the whole world is on our side?

With the old guard dead or not long for this mortal plain, with a new generation at the helm of the revolution and some 60 years since it was shown once again that the people united cannot be defeated, let us finally end this blockade on Cuba. This nation which has done so much with the little that it has been forced to make do with remains an inspiration to all members of the Socialist camp, the camp which yearns for national liberation and which calls for self-determination. Cuba, which has and remains a friend to all the world, from fighting against apartheid to fighting infections and educating the masses, deserves this. A nation that has asked nothing more than to be left alone to build a society which their people are comfortable with and who give so much to the world must be given this. An end to the blockade means the ultimate chance to fulfil the vision of the Revolution.  Let us help them by demanding an end and finally tearing down the inhuman blockade against Cuba.