Education: Change May Be Uncomfortable, But Necessary 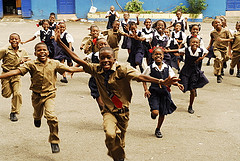 The COVID-19 vaccine is here and is being distributed even though there are some appointment and distribution snags. I urge you to register as soon as you can. Remember that the effect of the vaccine is not instantaneous so respect the instructions offered and wear masks, sanitize, and observe social distancing.

Today I will turn my attention to education and relate a few precedents that have been disruptive prior to the current viral pandemic and that face our school systems at all levels. Undoubtedly Minister Fayval Williams has been getting a lot of flak for the on and off resumption of schools, but despite the numerous opinions of parents and teachers, she must comply with the total government assessment of the COVID-19 precautions.

It would be good if there was a clear statement with no variation, for example: the earliest decision for reopening will be made on August 15, 2021. In an emergency there are no thanks. If you die people will claim negligence; if you don’t die people will say unnecessary panic. If you take your responsibility seriously you will never be commended; and that is the nature of managing disasters.

Education in a pandemic; a disaster; an act of God; or a war, is subject to dislocation and there have been many precedents. The First World War (1914-18) disrupted schools in all of Britain and Europe as men went to fight and women went into manufacturing of war supplies. The fighting was face-to-face in the trenches, and medical personnel were in the field hospitals and many were killed.

Britain and Germany suffered major losses of doctors and nurses which they could not replace by their own broken economic framework. In 1919, Cornwall College became the first public school in the British West Indies to teach physics (a pre-requisite for medicine) and that school certainly produced some of the finest medical practitioners in the Commonwealth. So Britain replaced the lost years by intensifying education in areas of scarcity at home and overseas as a strategy. They seem to have recovered from the schooling lost in WW I.

Again WW II (1939-45) brought a crisis in Europe; Russia; the USA; Japan; and The Philippines except in this case danger came from far away not just face-to-face on battlefields. War expanded to air and sea, and brought more casualties to the civilian populations in home countries and schooling as well.

Britain had three distinct student interruptions. 1-3 September 1939, 1.5 million students moved to the countryside from London, Manchester, Liverpool, and Newcastle (all industrial cities). In January 1940 they were returned as what was called “the phony war” seemed not to be happening.

They moved again from September 1940 due to the “Blitz”. Then they moved again on June 3, 1944 due to the attacks of the V-1 and V-2 rockets fired from across the English Channel. The combination of makeshift schools under trees and family dislocation must have set them back to a stage where radical counter-measures were deemed necessary.

In The USA, there were similar dislocations during their Civil War. In the aftermath economic activity waned (especially in the South) and budgets for education were cut. The addition of racism embedded in schooling has affected African-Americans to this day, and still requires a complete halt of any disruptions that come from segregation.

Several factors have accompanied these disruptions and a few of them include school closures and inadequate family support structures; childhood trauma (war and urban violence); and social and political intentions or inadequacies that have been used to suppress of warp educational outcomes. Many countries (including Jamaica) have seen potential advances in education as forfeiting power and control to a large mass population who may find other political agendas outside of the traditional political systems.

If we had good Internet connections and learning devices, many children would have been housed in rural areas and could see that there is an alternative lifestyle outdoors when compared to the hot zinc roof of the inner-cities. They would have learned that the sound of gunshots and the sight of dead bodies in the road is not their only future. Perhaps we should be creating schools of excellence in rural areas with excellent living facilities for teachers and students.

Minister Williams and her team must come to the realization (at last), that virus or no virus, Jamaica’s education has been failing for decades. The lowering of standards of teaching and learning; the relevance of the curriculum; the environment of schools; the need for functioning data resources; and digital access at reliable speeds; must form a part of a new discussion.

We talk about digitization but do not design for it. We speak to multilingual education, but struggle with English. We publicize STEM but have no labs (real or virtual) and even fewer cutting-edge instructors. We accept mediocrity in everything except sports but don’t put the resources in for the search for other excellence.

Dear Minister, please re-look at Bloom’s taxonomy and place Jamaica’s current situation on the scale and you will find that we are very low and cannot produce a modern workforce, and as such we will always be underpaid; unproductive; and show few signs of productive improvement. That is a very dark future.

Then Minister, please choose the spot where Jamaica has to be in order to satisfy our citizens. When you have done so, then kindly raise it by another level, and when you have completed this tell us how much money per annum we will have to spend in order to get there in 10 years, and what changes will have to be made in the structure of our education.

Yes, Minister, I know that you are good with numbers and investment, so please put your financial skills above political expediency and tell us the absolute truth. This will not automatically make you very popular, but you will be vindicated (not vilified) by those of us who realize that change is necessarily uncomfortable for some.

So look to the recovery in technology of Britain and Germany who had the greatest educational disruptions in the same half century. Observe the changes and reformations that were put in place in order to measure their return to the forefront of science and technology; research and implementation; engineering and mathematics; following massive destruction.

Make no mistake, Jamaica is also in the process of massive destruction even without declaring a civil war. Let us do something radical.

3 thoughts on “Education: Change May Be Uncomfortable, But Necessary”