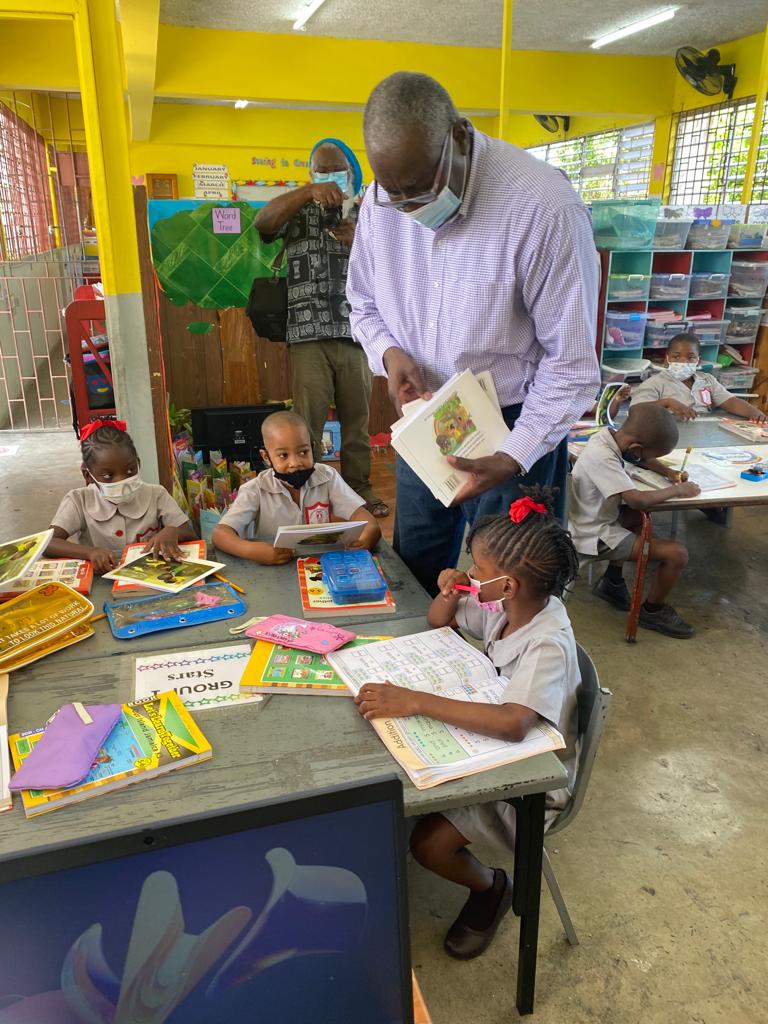 Although the remains of The Rt. Excellent Marcus Mosiah Garvey, Jamaica’s first National Hero, were brought back home in 1964, the talk of teaching the philosophy and opinions of Mr. Garvey, in schools, has not been realized, after 58 years. At least two generations have not been exposed to any substantial information on Garvey.

Empirical studies and recent experiences show that children at the pre-school level are very adaptable and fast learners of information presented to them, in a timely manner. They assimilate and retain information very well. Respective curricula and Lesson Plans were crafted for infant/basic school, primary, high school, and tertiary students.

The Marcus Garvey In Schools (MGIS) pilot project commenced in January 2022, and focused on five-year-olds from twenty-two (22) selected Early Childhood Institutions in the Corporate Area and the other 12 parishes. Teachers/practitioners were selected by their respective schools and received training.

The curriculum included but was not limited to the following topics:

The success of the pilot is dependent on the cooperation, collaboration, and approval of the following stakeholders who will provide the requisite guidance and technical support:

A budget has been crafted to cover expenditures for the project. Corporate sponsorship has been sought and provided to support this initiative.

The Marcus Garvey In Schools (MGIS) Foundation has been established. We have applied for Charity status and are hopeful that it will be granted.

Most of the objectives have been met. A contributing factor to the successful outcomes was the hour and one half “Teaching the Teachers” workshops conducted on Monday afternoons on the Zoom platform. Professor Clinton Hutton, Director, Institute of Technological & Educational Research, Mico College University, Mrs. Millicent DaCosta, Education Officer, MoEY, and Dr. Donna Akilah Wright, Professor, City University of New York, Medgar Evans College, were the tutors.

The time had come to meet the teachers and champions face to face.

On Tuesday, April 26, 2022, I was so grateful to have had the opportunity to meet, in person, teachers and student champions at five Pilot Project schools. A great time was had by all at Stony Hill Infant, Happy Hours ECDC, St. Ann’s Bay Infant, Central Basic, and St. Lucea Infant.

Before presenting the books, each student was asked his/her name. A student at Happy Hours was reluctant to accept the gifts because she has not been asked her name. These champions are amazing! Our champions will excel even further with the inculcation of the philosophies and opinions of Marcus Garvey.

The Wednesday visits started at the Whitehouse ECI, Westmoreland. We then visited Fyffes Pen ECI. A significant feature is the quietness of the champions at each institution. They were so excited here that the principal advised me that the champions had completed the first book activity of writing their names and drawing a picture of themselves before dismissal time.

We had another amazing time at Kendal Infant, Manchester. The champions led by Principal Headley and Lead Teacher Bailey, were fired up and ready to learn more about Marcus Garvey.

So up the hill and the winding road to Wire Fence ECI, South Trelawny. What a beautiful island home we’re blessed with. And these MGIS champions……Wow! It was an emotional visit. The principal and teachers do so much with limited resources.

Down the hill with its picturesque environs and eastbound to Seymour Edwards Infant, May Pen, Clarendon. Although the school had dismissed earlier, Principal Reeves, teachers, and a few champions not yet collected by their parents, made me welcome. There’s much to be thankful for. Yes, there’s hope in our beautiful Jamaica.

Day 3 commenced with the visit to Pentecostal Basic School, Kingston 11. Principal Lynch-Graham introduced Head boy and Head girl, Malachi Walters, Mia Lawrence, Prefects Keneilia Genas and Immani Hall. They all wear their badges of authority with pride and purpose. Excitement abounded during the presentations of “Marcus Teaches Us” and the dedicated Scrap Book.

Then it was on to Majestic Gardens Infant and a warm welcome by Principal Taylor, teachers and the Majestic champions. Hope is alive and well.

Professor Clinton Hutton, Mr. Kashil DeLisser (of Gallagher Ins. Brokers Ja. Ltd), and I arrived at National Baptist Basic, Trench Town, to a warm welcome by Principal Davis and the teachers who have longed for an in-person event.

It was a pleasure to meet the over 60 MGIS champions in three classes. Mr. DeLisser was delighted to hand over the books and Prof. Hutton snapped away. He confirmed that film was in his sophisticated camera.

It was then on to Citizens Advice Bureau Basic, commonly known as RJR Basic School. Principal Mr. Nigel Francis, has been teaching at CAB for 37 years and the principal for 27! Dedication personified!! Lead teacher Purrier-Green is proud of her fellow teachers and 62 champion students in three classes.

We finally arrived at Crayon College 2, where the seed was planted to develop MGIS. The champions have not forgotten since we first met last year October. Their energy and love for Marcus Garvey have been remarkably transfused in all the champions. I’ve had the privilege of meeting over the past three days.

The Future Leaders 2 champions assured us that although the visit would end the day, their energy and engagement would provide some well-needed rest.

Another successful day. Oh! Not to be forgotten is the response of the National Baptist champion who on receiving his book, said: “thank you Marcus Garvey”.

Thank you, MGIS teachers. Thank you. You are the Bestest!!!!

Day 4 started with arriving at Port Royal Infant where we were warmly greeted by Principal Jones and Lead teacher Jamellia Brown. Like all others, the seven MGIS champions were elated and eager to start working on “Marcus Teaches Us”

The journey to Lyssons Rd. St. Thomas, was with lots of grit and determination.  Meeting Principal Richards, teachers Skervin and Grant-Senior, and 11 MGIS champions were well worth the road trip.

The deteriorating road conditions to West Retreat Basic, Portland, delayed the meeting with these MGIS champions. Principal Dyer and teacher Parker, asked parents to delay their pickup as the children were looking forward to receiving their packages. Another great time was had by all.

Visits to all 22 schools ended on Monday morning, May 2, with greetings by Principal Gordon, Teacher Veronica Tapper, and the champions of Woodford Primary & Infant School. The community had heavy overnight rain but it was a sunny morning reflecting the bright and chirpy faces of the polite and focused champions. They were excited and received their books with glee.

MGIS considers the initiative to be a success and awaits feedback from the submission made to the ECC.

The proposed pilot project for Grade One students in the Primary Schools mirrors the Infant/Basic initiative except for the lesson plans (LPs). The intent of LPs prepared for this group is to infuse and enhance the current civics, values, and attitudes in such a way that a greater sense of self-awareness and self-actualization can be inculcated and strengthened in our children; particularly in the area of Financial Literacy. This will assist in effectively closing the achievement gaps that exist between income and racial groups.

21 Primary Schools have been identified to participate in the project. The Principals, Grade One Coordinators, and teachers are excited about the programme. The responses have been remarkable especially when there have not yet been any in-person meetings.

MGIS is desirous of infusing the teachings of Marcus Garvey into the established Curricula of the MoEY, and looks forward to mutual participation and collaborative efforts to achieve the desired outcomes.

“A people without the knowledge of their past history, origin and culture is like a tree without roots” – Marcus Garvey.