Marcus Garvey – A Lesson In Courage 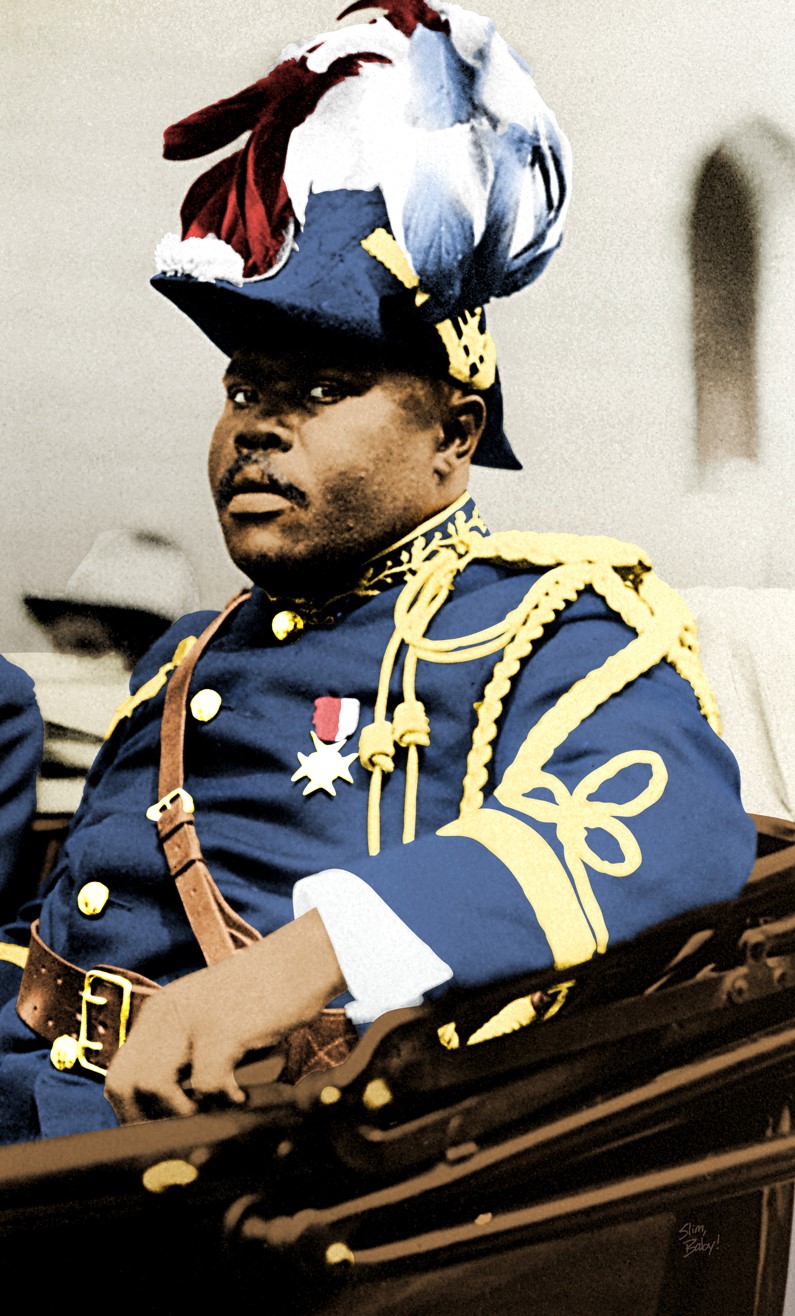 Marcus Garvey a lesson in courage

I consider myself to be extremely fortunate to have been chosen as the person who would receive the press kit that belonged to the late Ken Jones, a serious and devoted advocate of Jamaica’s first national hero, the Right Excellent Marcus Mosiah Garvey. The press kit contained notes, newspaper articles, acknowledgements of world leaders on the greatness of Marcus Garvey and the actual draft of the manuscript for the booklet he compiled with quotations collected over many years.

However, what is unique about this press kit is that in his introduction as the editor of the booklet titled Marcus Garvey Said… Jones wrote “…Publication of this booklet is intended to help set the records straight by providing a first-person account of the man, his ideas and his work.” He went on, “The main contents are taken from a statement written by Mr. Garvey while he was in Tombs Prison, New York City, awaiting the result of his appeal against conviction for mail fraud. Garvey was only 36 years old.”

The green folder with the words ‘Press Kit’ written in bold letters had taken a very strange and circuitous route before being placed in my hands and it’s for this reason that I write this tribute, as a lesson in courage given by Marcus Garvey himself to be shared by those who may wish to know why he was so driven to uplift his own race.

Garvey has often been described as being a visionary, a prophet and based on what he says of himself, one could probably add being a soothsayer as well.

According to Garvey “At the age of eighteen I got mixed up with public life. I started to take an interest in the politics of my country (Jamaica) and then I saw the injustice done to my race because it was black and I became dissatisfied on that account.”

Garvey said he travelled extensively through South and Central America and parts of the West Indies to find out if the racial injustice and prejudice were elsewhere and he found it to be so.  In his own words he said “I set sail for Europe to find out if it was different there, and again I found the same stumbling block — “You are black”.

Garvey apparently found his life’s purpose when he declared that he became dissatisfied on that account when he saw that racial injustice and prejudice were in and outside of Jamaica.  One of the lessons we can learn from people who are courageous is that they work to make changes in the laws when they see something is wrong.

Marcus Garvey showed a lot of courage when he asked “Where is the black man’s government?”  “Where is his king and his kingdom?” “Where is his president, his country and his ambassador, his army, his navy, his men of big affairs?” He saw that something was wrong and he set about to correct the situation and decided that since he could not find any of the above, he declared “I will help to make them.”

Garvey must have realized how daunting a task this was going to be, as he read of the conditions of black people in America. He said: “I read Up from Slavery by Booker T. Washington and then my doom of being a race-leader all dawned upon me.” It was as if Marcus Garvey was able to foresee his future, but he was determined to follow his dream — another hallmark of a courageous person.

His dream was fulfilled when, on the 19th day of August 1914 he founded the Universal Negro Improvement Association and African Communities (Imperial) League (UNIA-ACL) with the vision to create a programme that would unite all Negro peoples of the world into one great body, to establish a country and government absolutely their own.

In his own words Marcus Garvey expressed his surprise as he said “I really never knew that there was so much colour prejudice in Jamaica, my own native home, until I started the work of the Universal Negro Improvement Association. The daily papers wrote me up with big headlines and told of my movement.  But nobody wanted to be a Negro.  Men and women as black as I, and even more so, had believed themselves ‘white’ under the West Indian order of society. I was simply an impossible man to use openly the term “Negro” yet every one beneath his breath was calling the black man a Negro.”

A definition of someone who is courageous says, “A courageous man goes against the tide because he has a higher purpose.” Based on the status quo of the Jamaican society, Garvey said “I had to decide whether to please my friends and be one of the black-whites of Jamaica and be reasonably prosperous or come out openly and defend and help improve and protect the integrity of the black millions and suffer.  I decided to do the latter, hence my offence against the “coloured-black-white societies in the colonies and the Americas.”

Marcus Garvey was indeed a lesson in courage and purpose. He did not let his fear stop him as he admitted that “I was openly hated and persecuted by some of these coloured men of the island who did not want to be classified as Negroes, but as ‘white’. They hated me more than poison and they opposed me at every step, but I had a large number of white friends who encouraged and helped me.”

What Garvey says next, surely defines him as a man of courage with a deep sense of purpose. But his white friends were afraid of offending the “coloured gentry” that were passing for white. Hence my fight had to be made alone. I became a marked man, but I was determined that the work should be done.” Like most courageous people, Garvey believed in himself and was not afraid to stand up for himself and others as well.

He proudly stated the fact that “…I travelled all over the country (USA) for the Association, at my own expense, and established branches until we had about 30 branches in different cities. By my writings and speeches, we were able to build up a large organization of over 2 million by June 1919, at which time we launched the programme of the Black Star Line.”

Garvey seemed to have fostered an innate distrust for black politicians when he said “To have built up a new organization, which was not purely political, among Negroes in America was a wonderful feat, for the Negro politician does not allow any other kind of organization within his race to grow and thrive.”

As a courageous man, Garvey was able to ‘stand in his truth’ and express himself in ways that were authentic to him. He had no qualms in expressing his feelings that his downfall was planned by his enemies. Envy and jealousy were the constant companies surrounding the initial success of the Black Star Line, and his fame among Negroes was too much for other race leaders and politicians to tolerate.

Ken Jones, in his introduction to the booklet Marcus Garvey Said, stated very clearly that “Throughout the years, Marcus Garvey has often been misunderstood and maligned, particularly by those whose knowledge of him is based upon hearsay, rather than authentic documentation.

From his own words Garvey said, “With robberies from within and from without, the Black Star Line was forced to suspend active business in December 1921. While on a business trip to the West Indies, the Black Star Line received the blow when US$25,000 was paid to purchase a ship, but the ship was never obtained and the money was never returned. The company was further defrauded by dishonest men who were close to me and this resulted in my being indicted for using the United States mails to defraud investors in the company. I was subsequently convicted and sentenced to five years in a Federal penitentiary.”

For all his courage and strength of purpose, Garvey had to resign himself and face the fact that “Being black, I have committed an unpardonable offence against the very light-coloured Negroes in America and the West Indies by making myself famous as a Negro leader of millions.  In their view, no black man must rise above them.”

He went on further to say “My enemies have tried to make it appear that I and the UNIA are hostile to other races.  This is absolutely false.  We love all humanity.  We are working for the peace of the world which we believe can only come about when all races are given their due.”

In his closing remarks, a very defiant and courageous sounding Garvey said “The fight for bread and position will be keen and severe.  The weaker and unprepared groups are bound to go under. This is why we visionaries are fighting for the founding of a Negro nation in Africa, so that there will be no clash between black and white and that each race will have a separate existence and civilization all its own without courting suspicion and hatred or eyeing each other with jealously and rivalry within the borders of the same country.”

Many people are of the opinion that the most important part of Garveyism, which is the philosophy that grew out of his writings and speeches, was the return of black people and people of African descent to the source — Africa. This was a very courageous idea of Marcus Mosiah Garvey that can be interpreted, both physically or spiritually, meaning that ‘Back to Africa’ can also be a call for the black community to maintain a separate racial identity.

People of courage believe in themselves and know their purpose to such an extent that being born into humble circumstances was not a deterrent for Marcus Mosiah Garvey to pursue his dream of becoming an international race leader who expressed himself in bold and authentic ways, despite some errors. He inspired generations of black and African people, even from beyond the grave, and some of his last recorded words were “When I am dead, wrap the mantle of the red, the black and the green around me, for in the new life I shall rise up with God’s grace and blessings to lead the millions to the heights in the triumph, that you well know.”