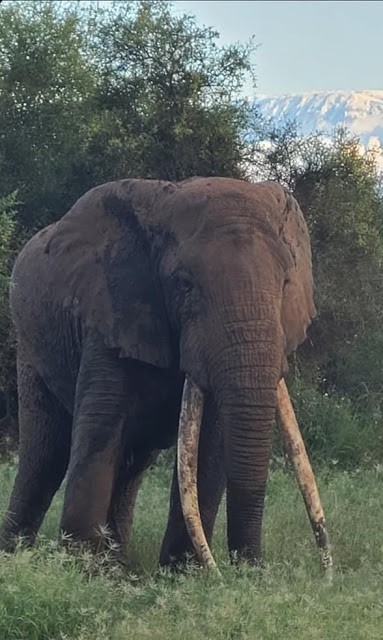 Before 2020, I had never really had any interest in visiting Kenya. For, it wasn’t one of the African countries from which slaves were kidnapped and brought to Jamaica. So it never featured in any stories told by any our ancestors.

Nevertheless, when my friends Kelly and Denis were posted there and began to share photos of the wonderful flora and fauna in that country, I fell in love instantly.

Despite the pandemic, I had to take advantage of the opportunity to join Rupi’s safari when I heard about it, and it’s a blessing I did.

We were booked to spend four days at the Amboseli Porini camp in the Selenkay Conservancy. It borders Amboseli National Park.  To get there we travelled on excellent highways from Nairobi, with signs pointing out how close we were getting to Tanzania. Then our very experienced driver swerved off into the bushes, where only special four-wheel-drive vehicles dare to tread.

After about a 20 kilometre ride off-road, we arrived at the camp. But it was much better than I expected. For in my days of camping, it had been a simple tent with sleeping bags and everything outside.

The reception area here was very welcoming and our tent had two large beds, inside plumbing and electricity — solar power, of course.

We were met by the nicest young men, who were quick to assure us that everything we wanted would be available, including sumptuous international dishes. Three meals per day too.

We settled in, had some refreshments, then they asked if we wished a mini- introduction to some animals in the conservatory.

Wild horses couldn’t stop me, for already I had become hyped-up, seeing cute monkeys playfully scampering around our compound.
Unfortunately, they were very scared of humans as they were not at all accommodated in the camp due to their penchant for stealing everything in sight!

That afternoon, we boarded the safari vehicle for a trip out into the wild with an adequate supply of liquor to calm our spirits at the bush bar. We were taken to a platform not far from the camp, which overlooked a water hole.  We were informed that the animals came there when they were thirsty or simply wanted to frolic around in the cool mud.

I was told that this was a common breed known as Vervet or blue balls monkey. It took me about two days to find one that would expose those balls, so I could get the evidence that they were really blue!

As we waited for some to appear, someone pointed excitedly to the distant bushes, behind which he said he saw elephants that were coming our way. Full of excitement we all peeled our eyes in that direction. But no elephants emerged.  Minutes later, the guide said there was a huge elephant behind us! It was then we learnt that though monstrous, these massive creatures move around silently because they walk on tiptoes. Nothing I have ever experienced came close to preparing me for that grand elephant with tusks almost touching the ground.

Our guides said his name was Michael and he was around 30 years old.
Totally ignoring us, he headed straight to the water hole. There he played around, spraying water all over his body with his trunk and rolling in the mud. We kept our eyes pasted on him to ensure that we missed nothing.

About half an hour later, almost a dozen other elephants marched in single file to the water hole. Not knowing what to expect, we waited with bated breath to see how this huge occupant would react to the crowd. But they must have been family, for as they arrived, they immediately started mingling pleasantly.

We humans could barely be contained as we watched the interactions in awe.

I have had close encounters with elephants before, having ridden and fed them in Thailand, but believe me, nothing can beat seeing these gentle creatures in the wild.

That was when it occurred to me that it is scenes like these which cause people to throw in their lifestyles and move back to nature to watch and study animals.

After that group interacted for a long while, another group of around six elephants approached the water hole, and guess what? The first occupants left.

We were told by the Maasai guide that this was the protocol among elephants when others wanted to use a water hole! We remained there till nightfall, gawking at the herds.

Would you believe though that when we finally left to return to the camp, we again ran into Michael!

This time he was standing with a group of antelopes. He must indeed be the king of that conservatory.

Every day during that four-day safari was filled with exhilarating experiences. Waking up in the bushes to the sound of the birds and other creatures was memorable. Even the presence of the ‘go weh bird’ whose quarrelsome, screeching noise, sounds exactly like it’s telling you to go away, could not spoil the chorus of other exotic sounds.   I was especially enthralled by the tale of the female  Jacana bird. She  has sex with male birds, lays the eggs then moves on to the next male while the previous mate is left to incubate the eggs and raise the babies.

How like so many of the males in the human race!

We were also introduced to the elegant, endangered, Great Crowned Crane, which, incidentally, is the National Bird of Uganda. It is so highly regarded there that it appears on their Coat of Arms.

It lays its eggs in the swamps, feeds in the grasslands and roosts in the trees.   SO MANY BIRDS, SO LITTLE TIME!!

I will admit to being slightly concerned at the camp once, on seeing a huge elephant feeding close to our tent. Fleetingly, I had visions of a crazed elephant charging through our tent village as I once saw in the movies. But no such excitement was at hand, for he continued feeding nonchalantly, totally oblivious of the vehicle we were in or the concerned occupants.   Other days were filled with more thrilling treks into the wild including a visit to Amboseli National Park.

Travelling there, we constantly had the exotic Mount Kilimanjaro in sight. It is located in Tanzania, around 70 kilometres from where we were staying. As we drove along, its snow covered peak shimmered in the sunlight, appearing to take on every iridescent colour in the universe from all angles.

I was also introduced to the most humungous termite nests I have ever seen anywhere. In fact, some looked like they had been architecturally designed.

I went close to one, but being allergic to reptiles, it was with some trepidation. For I was warned that these were a hangout for the large Monitor Lizard. Some of my friends on the safari saw one atop a termite hill but thank heavens I missed that one!

Amboseli park, with its beautiful lakes teeming with flamingos, massive hippos and open spaces occupied by frisky zebras, playful elephants, wildebeest, buffalos, etc was quite busy with safari vehicles when we arrived. Most of the passengers appeared to be Kenyans, revelling in the beauty of their blessed country.

Amboseli National Park seems to be a place which is visited by affluent tourists who fly into their fully equipped airport rather than abide the bumpy ride on unpaved roads through the bushes.

As I saw the planes parked there, my mind flashed to the wicked Trump boys who had posted a picture in the newspapers, of them posing with the poor wild animal they had murdered for a photo opportunity.

Again, I celebrated the Kenyan Government’s efforts to protect its wildlife. For everywhere, they have heavily armed rangers, who are licensed to detain or kill anyone who hurts their animals.

I also salute the Maasai tribe of Kenya who have made it their life’s work to protect the wildlife of their country.  During our stay at the conservatory, we had the honour of meeting Chief Jonathan Kanka from Tipiliti village.

It is that tribe that leased 15,000 acres (6,070 hectares) of their land to the operators of the conservatory in which our camp is established.

According to the chief, the Maasai do not eat wild animals. There is great value to the tourism industry in having the wild beasts around.

One disadvantage though, is that they now have more wild predators attacking their animals. But the conservatory does give them some compensation for that. In addition, it provides employment for their people and they also operate a gift shop there. They are paid a percentage of the earnings the camp draws in from visitors staying there.

The Massai also no longer take their cattle to feed on that land, except to eat down the grass when it gets too tall. (Tall grass allows destructive predators to sneak around unseen!)
This agreement is not only mutually beneficial to all concerned but to us visitors from all over the world and generations to come. For watching animals enjoy their environment in the same way we are allowed to enjoy ours, is the experience of a lifetime. SWEET MEMORIES