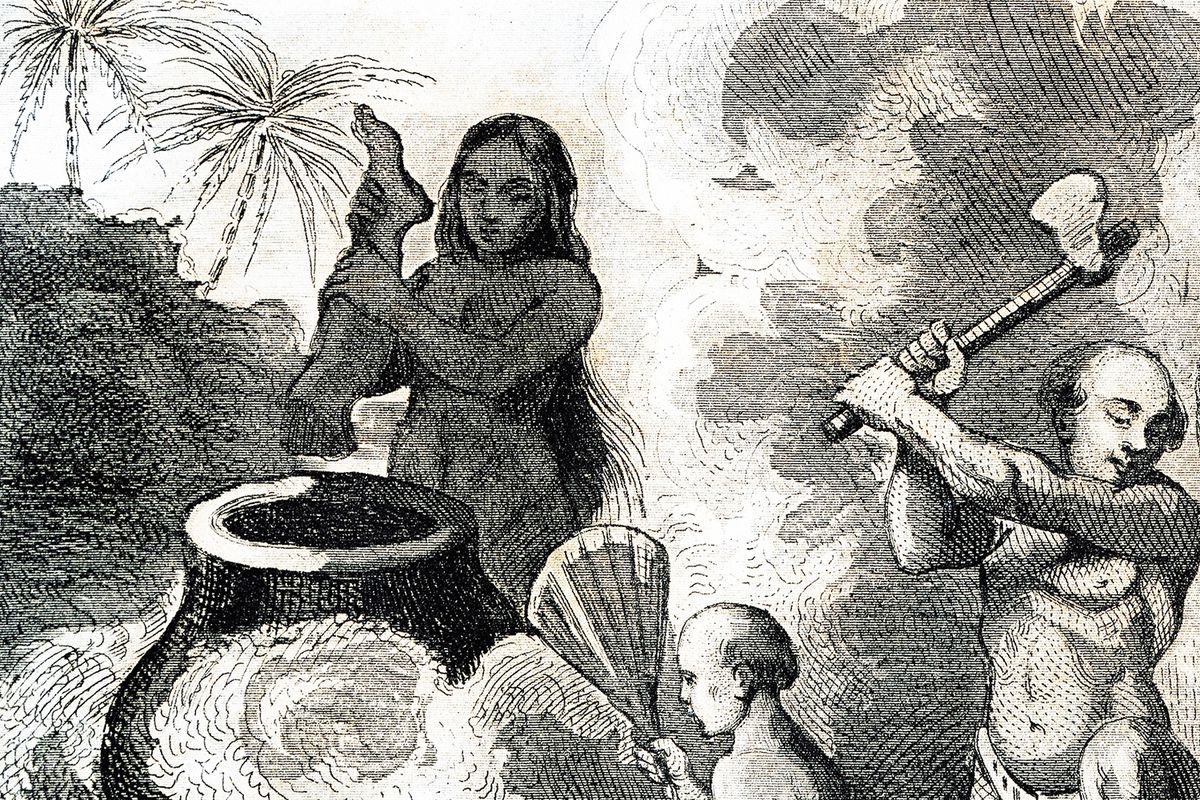 The Black man has often been painted in the dark, bestial and bloody hues of the savage cannibal. Such propaganda had been used as a pretext to colonize, to civilize and to “Christianize” “the brute”. This farcical and threadbare argument was and continues to be enforced through Anglo-American literature, Hollywood movies and through mind bending political conspiracy theories.

I remember watching cartoons on television as a child which — in the guise of harmless humour — reinforced this insidious and tragic principle. The white hunter — having been caught by the ferocious natives with their dark skins, large eyes, thick lips and bones adorning heaped locks of hair — could be seen being boiled alive in a large cauldron placed on an arranged fiery furnace.

So as to ensure that the reader is on the same page that I am on, the dictionary defines the word cannibalism, simply, in the following manner: “The practice of eating the flesh of one’s own species.” This was the caricature painted of the Black man on the African continent outside of and apart from the wider historical and anthropological contexts of the subject.

What the purveyors of this mischief frequently omitted was that the practice was widespread and not unique to the African continent. Europeans, themselves, have had their share in this less than delectable and woefully ungodly practice. And so, what they have spun in respect to the Black man was a propaganda of sheer convenience with tragic consequences and nothing else.

When Europeans did refer to cannibalism on the world stage they were quick to point, for examples, to the island Carib people of the Lesser Antilles, to the “natives” of New Guinea and the Solomon Islands, to Fiji, to the Amazon Basin, to Melanesia, to the Maori people, to the Congo, and to ancient and Roman Egypt,  yet never to themselves. But, at some point, people with a conscience and who valued the integrity of science and of scholarship endeavoured to do the right thing and pointed to what was true. They recognized that mankind shares a common destiny and that the only way to move forward in building a brighter future for all tomorrow is through a broader and a deeper understanding of all today. The article titled ‘Europe’s Hypocritical History of Cannibalism’ is a case in point.

All of that having been said, I would like to posit a form of cannibalism akin to breaking human bones and eating human flesh. It is not one likely to be found in books, nor one taught as a subject at any university albeit, perhaps, under some other name. It is one of a metaphysical type — one of heart, mind and soul. And, what one sees is that the fate of those three elements of the human personality tends, also, to be that of the body. Enslaved minds — enslaved bodies.

If the Black man is considered to be a part of the human race, and has been preyed upon by others within the pantheon of races, then the definition offered earlier of the word cannibalism is also true in this dialectic when it stated: “The practice of eating the flesh of one’s own species.”

Generally, man has a penchant for attacking and “feeding on”the weaker of his species. This is nothing new. All races are guilty in this regard. And so, the kidnapping, enslavement, raping, stealing of resources, and the murdering of colonized Black people are nothing new. But what is unique is the consumption and the obfuscation of the identities of Black people and of all their accomplishments by Europeans in comparison to the experiences foisted upon other subjugated and enslaved races, cultures, creeds and ethnicities. Black people in the Americas had their souls callously ripped from them and allowed to go adrift into intellectual, spiritual and cultural oblivion.

I would like to point out, for a moment, that the idea of the cannibalism of souls is not a new one, but perhaps only in respect to my usage of what Europeans have done to Black people. A “soul eater” is a folklore figure in the traditional belief systems of some African peoples, notably the Hausa people of Nigeria and Niger.

Belief in soul eaters is related to traditional folk beliefs in witchcraft, zombies and related phenomena. “The soul eater is supposedly able to consume an individual’s spirit, causing a wasting disease that can be fatal; ‘the soul eater is a classical form of the cannibalistic witch’.” But, what might be just folklore or traditional beliefs to such peoples has been the reality of Afro-Americans and other colonized Black people who were bewitched by a devilish wand which was waved with incantations inspired by the lusts for power and for wealth.

With such “white magic” Black people have been made bereft of their own God-given identities, which were substituted systematically by false and inferior brands. They were then left with only the digested and deformed dregs of their own histories, cultures and languages that were excreted after being feasted on by foreign exploiters.

Once appropriated falsely for their own hubris what was left for colonized Black people were by-products which gave no bearing on who they were originally, with no idea as to where they were from, nor as to who their ancestors were. They provided no clues to their full potential. The race, as a carcass having been picked clean by vultures, was left as a shadow of its former self. Is this not a cannibalism of soul? Does this not make Black people — especially those still mired in ignorance and with a sense of inferiority — as “walking dead”?

To steal a people’s land or even their bodies is one thing, but to steal their psyche and their identities is another matter altogether. Colonialism, with its racist chattel slavery, illegally performed a lobotomy on the Black diaspora which has induced an amnesia of sorts and, in some respects, a comatose state from which they are still struggling to recover. The cries of Afro-Americans through The Black Panthers, through The Nation of Islam, through the NAACP, through Black Lives Matter and other organizations of that ilk are only of those who have managed to waken from a very long slumber.

Ontology is a branch of philosophy which, in simple terms, seeks the classification and explanation of entities — about the nature of being and existence. That being said, that could be applied to other races and to other cultures, but not to Afro-Americans. Those other groups can be studied, as they should, in their own natural habitats, but the Afro-American has no such thing, having been engrafted by force into an oppressive, demanding and racist ecosystem of the Capitalism of slavery. They are as fish out of water, or as Polar Bears in the middle of the Sahara Dessert. They are as grown lions forced to drink milk — taught to purr and not to roar.

I, therefore, believe that Franz Fanon in his book, Black Skin, White Masks was absolutely correct when he wrote: “Ontology does not allow us to understand the being of the black man, since it ignores the lived experience. For not only must the black man be black; he must be black in relation to the white man. Some people will argue that the situation has a double meaning. Not all. The black man has no ontological resistance in the eyes of the white man. From one day to the next, Blacks have had to deal with two systems of reference….their customs and the agencies to which they refer were abolished because they were in contradiction with a new civilization that imposed its own.”  Cannibalism of souls!