Media must pick a side and stand by that choice 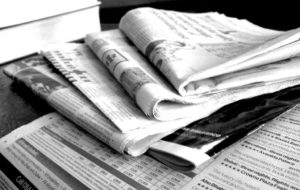 The media is laced with hypocrisy.  Many times it is unintentional, but those unintentional moments oftentimes mount after a while. These moments ensure that whatever stance the paper, editor or writer may hold, a belief sets in with the populace which can never be removed no matter how much correcting is done.

I’m not one to say that the papers don’t have an agenda, they all do, either to serve the interest of their shareholders/the owner or to follow the mission statement. However, that differs totally from what can only be called editorial schizophrenia which is when the paper holds one view, claims it to be the matter which needs most urgent attention only to publish an article which runs counter to it.

To clarify, my issue is not so much that the papers run contradictory stories, that, after all, is their purpose to run news which often is contradictory. However, and I can’t stress this enough; it is borderline insanity to say that X is the issue and then run a piece which is in praise of X.

As an example, the violence against our women and minorities is at a level before unseen. The newspapers have made this, rightly in my view, an issue of major importance. That however did not stop a paper from running a scandalous headline which made light of a young girl being molested by a police officer (I’m sure the author of that shameful headline thought it was a hilarious play on words).

The papers rightly highlight the fact that abuse against our children is at monstrous heights, and yet they can still run articles where they speak of adults (say a pastor) having ‘sex’ with a minor. That is madness, it is rape and no paper claiming to be bringing this to the front burner should shy away from that word for one can’t consent to sex if one is under 16 so it is rape. To call it otherwise shows a mind not really set on the issue.

We see this bipolarity when it comes on to crime and how to deal with it. In one banner editorial after another we see where the papers decry the link between the gangs and the politicians, condemn them and demand that they atone for their sins. However, as if some bug has been lodged in their brains and then activated, they can run articles decrying politician X when he/she stands up in Parliament and condemns his opponents for their linkages to criminals (hypocritically and for party gain), pat themselves on the back for shunning that kind of politics and inviting their opponents to do likewise (while staying mum on their party colleagues).

There are ways and means of getting across the fact that the politician is a damn hypocrite while tipping your hat to the fact that they are on to something without destroying the argument you have yourself made in the process (that MPs must call each other out and work for a viable solution).

Poll after poll has shown that Jamaican citizens are becoming disenchanted with politics and a plurality now openly call for military rule.  The papers again highlight this in banner editorials as something which should be countered (even listing reasons why military junta is bad). Yet the very next day (or even on the same day) they can have a letter of the day or an opinion piece calling for a total police state with rights for all suspended. The two don’t add up and for the papers to call attention to the fact and warn us, while going easy on the admin and persons calling for such a state, must be called out; they must pick a side and stay there.

Please note again, this is not me railing against the editorial agendas. They have, in bold print, nailed their colours to the mast and, as noted before, all papers and news outlets have an agenda. What I am railing against and will continue to rail against is a newspaper which calls out the police for planting evidence and generally failing all round while printing pieces from people who want to give them more power. I will rail against a newspaper which calls out politicians for being as corrupt as the clergy while running pieces by people which seek to diminish the same politicians’ corrupt acts.

I have a problem with hypocrisy, and I have a problem with people who mean well but won’t go the whole way for whatever reason (their bottom line, wanting to seem fair and balanced etc…). There comes a time when choices are made, and they are maintained, regardless of what others say or think (and especially when it is a line which is now editorial policy). This then means that you, after going to bat for gay rights, should be shunning those persons and pieces which seek to have those persons shoved back into the closet; it means after railing against a politician for corruptly aiding their constituency you shouldn’t be running pieces the next day by commentators defending the corrupt individual.

Too often, the media houses have been wishy-washy and seen abdicating their self-professed responsibilities of speaking truth to power and holding powerful persons and institutions’ feet to the fire; too often they speak out of both sides of their mouths, and we the public are left holding the bag, feeling the burden which the editorial staff claim to warn against but still push us to. 18 and a half years of PNP misrule aided by the media while wailing against corruption, 4 years of dithering by the Golding administration cheered on by sycophants in the media, 4 years under the Simpson Miller regime which was again cheered on by the media even as poverty increased and our infrastructure crumbled. The same media houses which praised these admins also pointed out the glaring flaws in them while highlighting many reasons why they should go and never come back (gangs of Gordon House ), and yet they still run pieces which seek to diminish the damage they have done, pass it on or ignore it totally.

If the papers are not willing to stand by their own editorial principles, if they can’t toe the line they themselves have set then please, get rid of the editorials, leave the opinion, the news and everything else because to leave it as is makes you look like a fence sitter at best or downright disingenuous at worst. Causes such as the fight for women’s rights, for sexual rights, for an end to corruption are serious causes and don’t need allies, no matter how powerful they are, who also give a platform and megaphone to those who are their enemies.

Most people in life don’t have the luxury of a large company with millions of dollars behind them backing their causes. Newspapers, editors and their staff have that luxury. It should not be abused, and to squander it is to spit in the faces of allies who don’t have that luxury. Please use it correctly or keep out of the fray.

Please note, for those who feel that what I am calling for is a dictatorship or a censored press, may I just say, far from it and it is already with a gatekeeper. Newspapers are beholden to their owners and or shareholders and no one else (with the honourable mention going to advertisers). They are private companies and need only worry about their bottom line. I understand that papers feel the need to play both sides to ensure that they do not lose market share, and if they are truly beholden to the almighty dollar then take the colours off the mast. No one will then be confused when you run two pieces countering each other on matters of serious importance. But until that happens I will demand that you stand by your professed principles and be the partisans that you can and should be (note that these papers will go to bat and remain so for businesses affiliated to their owner or mother company) or leave the field completely for those who will stand for them.