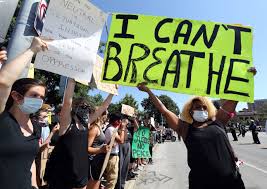 Does White America, by and large, misunderstand the centuries old plight of Black America? Is what they project, in many instances, as a “misunderstanding” of the issues in that regard really symptomatic of wilful indifference or of naive ignorance? The concept of any two parties coming to an impasse due to a misunderstanding implies that both parties were earnest on a quest in trying to understand and, by extension, to appreciate each other’s experience. The word intones a relationship of sorts or an attempt to establish and to secure one.

Misunderstandings do not have to be seen as symptoms of some deep social malady, but as part and parcel of the “give and take” and of the need for feedback and for clarification during the course of the development of normal and healthy human relationships. And, so, for any meaningful dialogue on any matter of significance to occur an assessment must first be made of all perceived or alleged claims of “misunderstandings.”

The hot topic issues of race and racism in America, therefore, must have the lenses through which they are viewed assessed, routinely before there can be any real hope of honestly, of openly and of effectively dealing with such issues which have proved to be doggedly persistent and perennially thorny from the country’s inception to the present. And so, again, is White America, largely, suffering from a misunderstanding of the African-American experience?

Could it be that their reactions to so many things pertaining to the people of colour amongst them is based upon an acute understanding of what is going on in our modern American society? Is voter suppression, for example, as seen via sweeping legislative actions taken by a swathe of GOP-held state houses across this country indicative of an ignorant “misunderstanding” of things, or of anxious attempts as ones battening down all hatches or trying to alter course on turbulent and uncertain seas on the approach of a huge storm?

Does a bonafide relationship exist between the races, or are the current “misunderstandings” between the two really “disunderstandings” which affirm the spirit of the American antebellum south, or, metaphysically, that which was behind the Jim Crow laws which were enacted to deprive Afro-Americans of their constitutional rights after the Civil War?

Or, to be fair, as it takes “two to Tango”, as they say, and as there are always “two sides to the story” could it be that Afro-Americans are misunderstanding their White brethren?

If so, in their case of “misunderstanding” are they, as a consequence, overreacting to what the GOP is currently doing since the demise of the Trump Administration to make voting in this country more secure as they claim? Or is it, by their reactions to such legislative moves and to the pressure brought to bear on society in the wake of George Floyd’s lynching, reflective of the fact that they do have a handle on what is going on and what is really at stake for Black America?

Could it be that both White and Black America are clear on what has been going on and that it is actually such clarity of thought, though seen through different prisms of moral, social or cultural values, which is the problem? Is it, therefore, understanding and not “misunderstanding” nor “disunderstanding” – when at least one party does not give a hoot about what the other is thinking and feeling that is at issue? If this is the case, then whither America?

What is the path for this country’s future as far as real, vital, equitable and agreeable change is concerned going forward? As French philosopher Albert Camus a wrote: “If men cannot refer to a common value, recognized by all as existing in each one, then man is incomprehensible to man.”

The question of race and racism in America therefore, poses an existential threat to its national security as nuclear war and Global Warming do. Because these issues keep recurring in the public square they suggest that they either had not been dealt with, or that having been addressed before enough was not done. Is understanding on any issue important? The answer is and will always be “Yes.” But, clearly, it is not enough. Again, whither America?