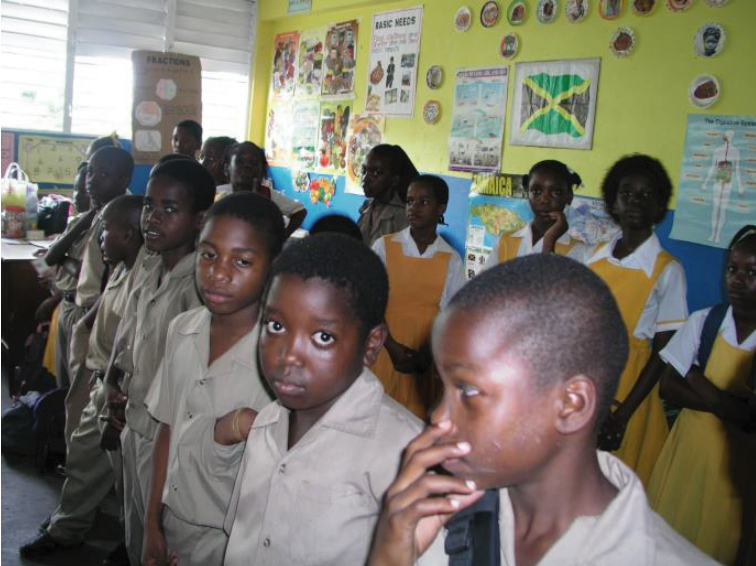 Recently Jamaica went through its now annual public outcry as children were turned back from school due to the length of their hair or other hairstyles. After the children were barred from entering the various school compounds there was the usual statement from government officials who decried the incident, black nationalists who shamed the institutions, and not to be outdone, the naysayers who insisted that the schools have done nothing wrong and that protocols were adhered to.

The arguments have been had before, and this incident is nothing new. We can go through the news archives to see kids being sent home due to the length of their hair. This is, if you will pardon the pun, old hat. What does interest me is how far in the gutter the argument has become that we don’t even take the time to point out the disgusting irony of this current situation.

The school in question that has caused the latest brouhaha is Kingston College (KC), the venerable purple and white. I know my history, and especially as a Georgian, I know that KC was formed with the key assistance of Bishop Gibson as a school for poor black boys in Kingston who could not or were not welcome at George’s etc.

That this school can kick boys out is ironic.  That it goes unmentioned apart from one person is disgusting and shows us how far the brainwashing and eradicating of Black consciousness, Black pride and Black nationalism has been successful. We talk a good talk but when push comes to shove, we are found wanting.

A large reason behind our being found wanting is that we do not value our history, therefore, we don’t research it and are forever trying to reinvent the wheel. Many people, during the yearly argument over hair length, comment on the fact that they or their parents went to school with long hair in the late 60s-70s and lament the fact that they or their kids can’t. They go so far as to say that these are the reasons we can’t progress as a society as we hold on to colonial laws. That last bit may be (and in my eyes is in a lot of areas) true, but here it is false, as false as those who blame colonialism for parliamentary dress codes.

This lack of an appreciation for history makes us not ask the obvious questions such as why, between 1960 and 1980, did the afro dominate? Why, between 1972- and 1980, did Parliament allow for women to have short sleeves and men to enter suit less? And could it be that between 1962 and 1980, particularly taking off in the late 60s with the Rodney riots, the Black Power movement had some sway in this? Educators, politicians, and societal influencers all were smitten with Black nationalism and that, in turn, bled into the youth who embraced it wholeheartedly. The same for the dress code, 1972-1980 was the experiment with socialism and independence, and in that time we threw off old colonial norms and fashions and this, in turn, bled into the school, academia etc.

None of that is spoken about and as a result, when we ask how we got here we conveniently forget to mention that in an effort to win power the Jamaica Labour Party (JLP) placed us in a near civil war and that, like in all civil wars, culture becomes a weapon to be used and an object to be attacked. Simply put, the People’s National Party (PNP) in the 70s was for the afro and dressing down so the JLP was against it. Michael Manley in a bush jacket and Edward Seaga in a suit, PJ Patterson with a PJ afro, all JLP members with cropped hair. It is no coincidence that when Manley regained office his attire changed along with the whole tone of the PNP (something which was not lost on the US embassy at the time).

But let us leave all of that aside, let us assume that the hair on these children’s heads was as long as Jr Gong’s locks and as matted as a Celt’s hair, they were interested in going to school. This is a country where literally in the same week there was a warning issued about the lack of boys in classes and how many who do go are gang members. That KC gate was for upper school, those sitting CSEC and CAPE exams, in a nation with a dearth of educated men and a greater dearth of young men wanting to be educated, we are barring them from going to school because of hair length. Something doesn’t make sense here, and again the fact that no one has picked up on this insanity is telling and shows how trapped on the reservation we have become where we harm ourselves in an effort to uphold rules that we don’t even discuss why we have in place.

We continue this practice of demonising black hair and falling back on the crutch of rule of law because at the end of the day the hatred of ourselves is so deeply ingrained and the results of standing up against it are still fresh in the minds of those in power that no change will be done.

To embrace black hair in schools would, at the end of the day, mean embracing the fact that we are a majority-black nation (which politician will kill the goose that is out of many one people) and would mean the natural asking of questions like why are the majority poor while the minority wealthy? This, in short, would mean the embracing of black power and all that it conveys, and as noted before, politicians in both parties are deathly afraid of repeating the 70s lest the US react in a similar fashion.

Thankfully this is changing, and things are coming full circle it seems. Just as in the 60s when the abuses in the US and elsewhere became so intolerable that the black power movement was born (re-energised truth be told) and spread here as we faced our own issues with a state that disavowed its blackness, so too today do we find ourselves in a time when abuses stemming from the US have fanned flames locally.

We do ourselves a disservice by negating a whole 20-year period of our history and a period that was, in truth, our most formative. A revolution took place ensuring that the Myrtle Bank Hotel would be opened to blacks, a counter-revolution took place erasing the losses and we are living with that now. We cannot allow the counter-revolution to be successful in dictating history, this may have embryonic origins with colonialism but this can be squarely laid at the feet of those between 62 and 80 years old, and we must air that dirty laundry and talk about everything without fear or favour or nothing will change and we will forever be having this argument.

2 thoughts on “Hair And Unspoken History”