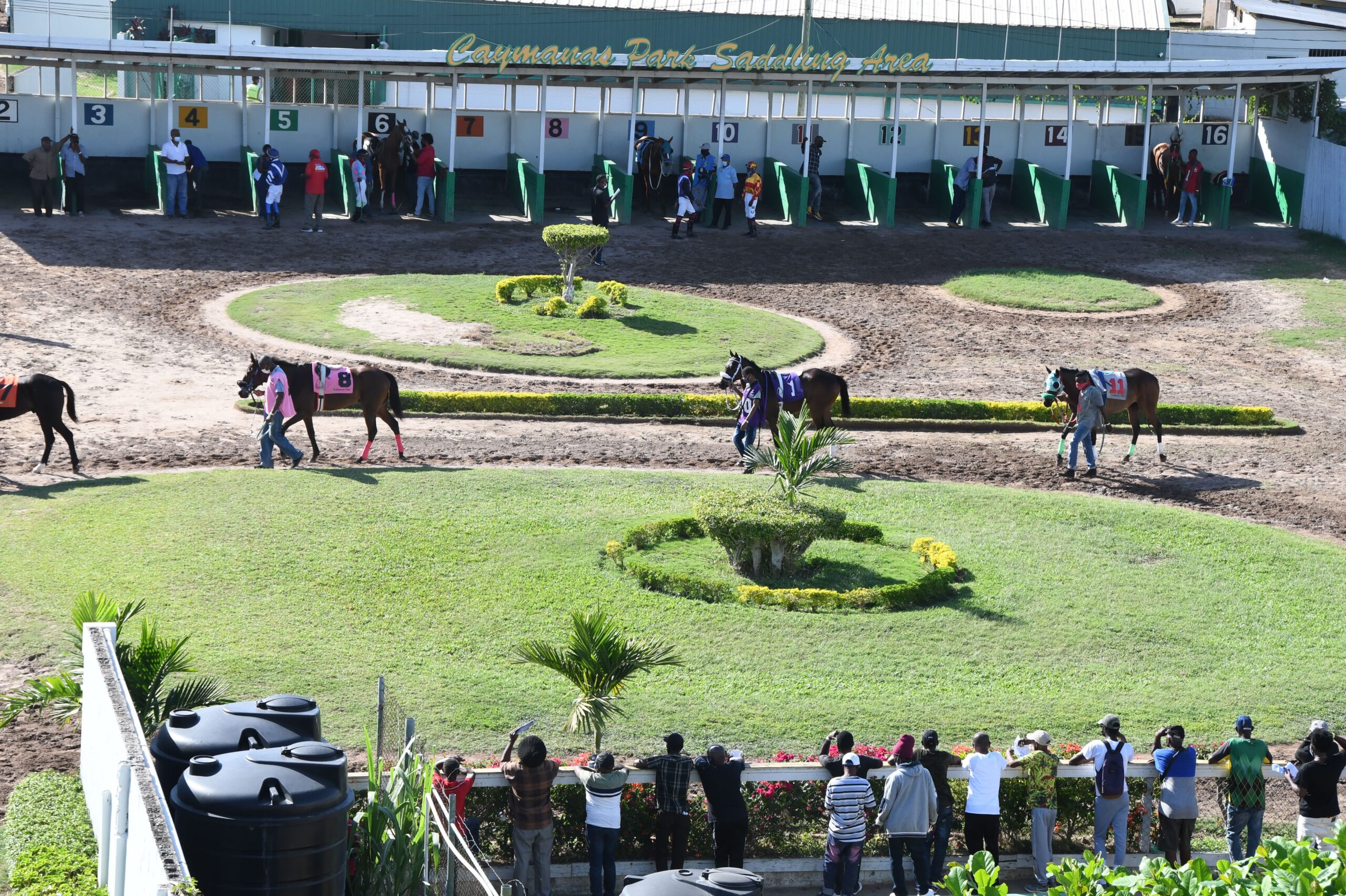 Believe it or not (By Ripley) this is my 100th Public Opinion column. What better way to celebrate than to re-tell Part I of a story last told almost 20 years ago? We must skip the usual departments for that but, as Nkrumah Bonner can testify, centuries are hard to finish, so readers might understand:

“Have I missed anything?” the small boy in a disheveled prep school uniform hopped nervously from foot to foot, peering over his father’s shoulder for a glimpse of the as-yet-forbidden fruit. “Take a bath, eat your lunch and then we can talk” was the gruff response. “But, have they started?” The boy had run home from the bus stop and, even in his overheated state, wouldn’t be put off.

“No, not yet” the long-suffering father knew there’d be no peace until the prized information was released “now go bathe!”

In the early 1960s television was still a marvel and the broadcast of races from Caymanas Park, a modern, sweeping racing complex that ousted Knutsford Park as horseracing’s Capital, wasn’t to be missed.

The little boy was born with horseracing in his blood. His mother grew up with her siblings on Arnold Road in the 1930s and 40s their home nestled between the stables of legendary trainer Abbie Grannum and the yard occupied by Tewfik Ziadie the patriarch of Jamaica’s first racing family.

He never tired of his mother’s stories of the days when Abbie, who was closely acquainted with the “demon rum”, tended to leave day-to-day details to Mrs. Grannum. His mother was present at the stable in the wee hours of many mornings as Mrs. Grannum shouted instructions to grooms over Abbie’s loud snores. Abbie Grannum saddled a phenomenal 402 career winners.

The little boy heard stories of Caymanas Park’s early days, when jockeys on the lead at the three furlong pole were alert for the shout of the master, Arthur Jones. “Dog coming!” Jones would yell, “Rent due!!” Younger jocks ahead would know to ease off the rail and let “Dog” through.

Tewfik was the first Ziadie to come to Jamaica. He sired J.W. “Lantern” Ziadie, who won 183 races and earned his nickname by frequently bringing his “gambling” horses to the exercise track so early he needed a lantern to see; and the brilliant Millard Ziadie, often Venezuelan Champion Trainer. His grandson Ralph owned and trained 1970 Derby winner, Royal Crest (A. Ubidia up); was many-time Calder Champion Trainer; an inductee into Calder’s Hall of Fame and belatedly into Jamaica’s. Tewfik himself, no slouch as an owner/trainer, had the distinction of owning and training Sunnydeen, ridden by A. “Gussie” Douglas, to win the second Derby run at Caymanas Park (1960).

These stories danced in the little boy’s head as he watched races on JBC-TV, then became addicted to radio commentaries when horseracing’s short-lived period on TV ended. These were the days of Saumarez, Spred Satin, Kandahar, Bonnie Blue Flag, L’amour and Chevalier.

The battles between Laurie Silvera and Allan Evans “Billy” Williams were monumental. Jockeys like Winston “Bulldozer” Ellis, Kenneth “Kiddie” Mattis, Donald Andrade, Neville Cousley and Trevor McKenzie dominated. You could almost see sparks fly when a young Sammy “Shuffler” Heslop produced one of his patented late runs to snatch spoils within shades of the wire.

Horseracing has always been identified with and by voices of radio commentators.  The earliest was legendary Charlie “Dollars to Donuts” McCormack. Charlie called home Caymanas Park’s first Derby winner, the filly Blush. Her Derby win created excitement in the little boy’s family as her owner, the much-respected, veteran patron of the sport, Jockey Club President Andrew H.B. Aguilar, was married to his grandmother’s sister, Vera. “Andrew HB” owned Jamaica’s leading sports goods store on Harbour Street managed by the enigmatic Bernard Cridland. Every Jamaican sports hero of any type got his/her start with gear from Aguilar’s.

For over two decades only four fillies won the Derby. After Blush, Princess Royal (trained by Sydney Watson for popular owner Pat Chung) won in 1961. She was the great Kenneth Mattis’ first Derby win. He also rode Ska (trained by R.A. “Bobby” Hale for the inimitable Lucien Chen) the 1966 Derby winner (finished second on the day but promoted after the winner failed a dope test).

The thrill of the little boy’s life came when he was taken to races by his father; allowed in the commentary booth to meet the great Charlie McCormack; and watched him call a race. The little boy was awestruck as Charlie lowered binoculars and uttered his trademark call “It’s all over bar the shouting – Dollars to Donuts!!”

By the time another filly won the Derby (1974) Charlie McCormack’s dominance had ended. On RJR, a two-man team was anchored by the extraordinary Del Weller, the finest racing analyst ever to draw breath in Jamaica. Del Weller also wrote a series of articles for The Gleaner, entitled “Inside Racing”. They remain the prototype for aspiring racing columnists. Their quality is yet to be surpassed. He was simply genius.

In RJR’s broadcast booth Del sat beside several race callers, starting with Desmond Chambers and then Ruddy Andrade. JBC countered with Vin Lumsden as a solo act. Vin’s commentary was superior to Andrade’s so the little boy habitually listened to Del Weller’s pre-race comments before switching to Lumsden for the race itself.

Ruddy Andrade was soon replaced by the most popular commentator of the time David “Wall of Horses” Vernon who earned the nickname by only ever calling the first two or three in a race, blissfully unaware of the rest. He would forever report a “wall of horses” coming on the outside in the stretch.

When Titania won the 1974 Derby, Vernon was still behind the mic but George HoSang’s skill and artistry ruled the racetrack. Trained by Michael “Buddy” Silvera for Hazel Chen she was HoSang’s second Derby win (won in 1973 on King Pin for trainer Ossie Lee and owner Mrs M. Chung).

George HoSang is acknowledged as Jamaica’s best ever. The little boy (then a college student) will never forget Derby Day 1976. As usual, Georgie rode the Derby favourite — a big strapping colt named Reca. Father and son watched from the ground floor and the sound and image of the field thundering past the winning post for the first time are indelibly imprinted in the boy’s mind. To everybody’s shock, Reca was the early leader. The crowd’s comments were unflattering as derbies aren’t won from the front. Yet, under an expert pace controlling ride, HoSang went all the way on Reca, quieting all who doubted him.

There were doubters. Hosang’s career began in 1967 and, when Laurie Silvera decided to give the young apprentice the ride on Derby winner Creation in an “A” Class race, punters were skeptical. HoSang confirmed their skepticism with a weak display, resulting in a narrow loss. On his return to the unsaddling enclosure, every available missile was hurled at him accompanied by a torrent of boos. That night, on JBC-TV sports, Lindy Delapenha — whose reputation for being wrong was iconic — pleaded for the youngster to be given another chance. He chided the stone throwers and concluded: “Who knows, this young man might turn out to be the best rider Jamaica has ever had.” So the man famous for never being right, used up his quota of “rightness” with one breathtaking prediction before returning to consistently picking losers.

The smoothest of all commentators was Desmond Chambers, the original “Good Morning Man”. But Desmond is fixed in the little boy’s memory for 1972’s Benson and Hedges Gold Cup — the race he couldn’t call. An electrifying stretch run by the great Monte’s Stitch, carrying 140lbs and Glenford “Cuttopeg” Walker, to win the most competitive renewal ever, left the usually suave Chambers stuttering. The first time in the race he called the winner’s name was after the horses were far past the post and it dawned on Dessie that neither Zareba nor Fearless Princess had won.

In a short five-year history, the Gold Cup had already developed an enviable reputation as the year’s most anticipated event due entirely to the exploits of imported gelding Kilowatt, owned by the irrepressible Neville “Bunny” East and C. Fornaris; trained by veteran Valbert Marlowe; and ridden by Cleveland “Velvet Gloves” Suckie.

Kilowatt won the inaugural run (1967) as a three-year-old under only 94lbs. The same combination successfully defended the Cup (1968; 112 lbs) but, on the eve of the hat-trick attempt (1969), Suckie declined to ride, citing an injured wrist and the ever-paranoid Bunny East withdrew Kilowatt from the race. In 1970, Kilowatt made it three from four Gold Cups (104lbs) and probably would’ve retired the Cup by winning three in a row had he been allowed to compete in 1969. Kilowatt’s Gold Cup dominance (second in 1971 as a seven-year-old) and his lack of form elsewhere are the stuff of which racing legends are made. Bunny East’s Gold Cup Day appearances, dressed in full Gold, were the talk of the track.