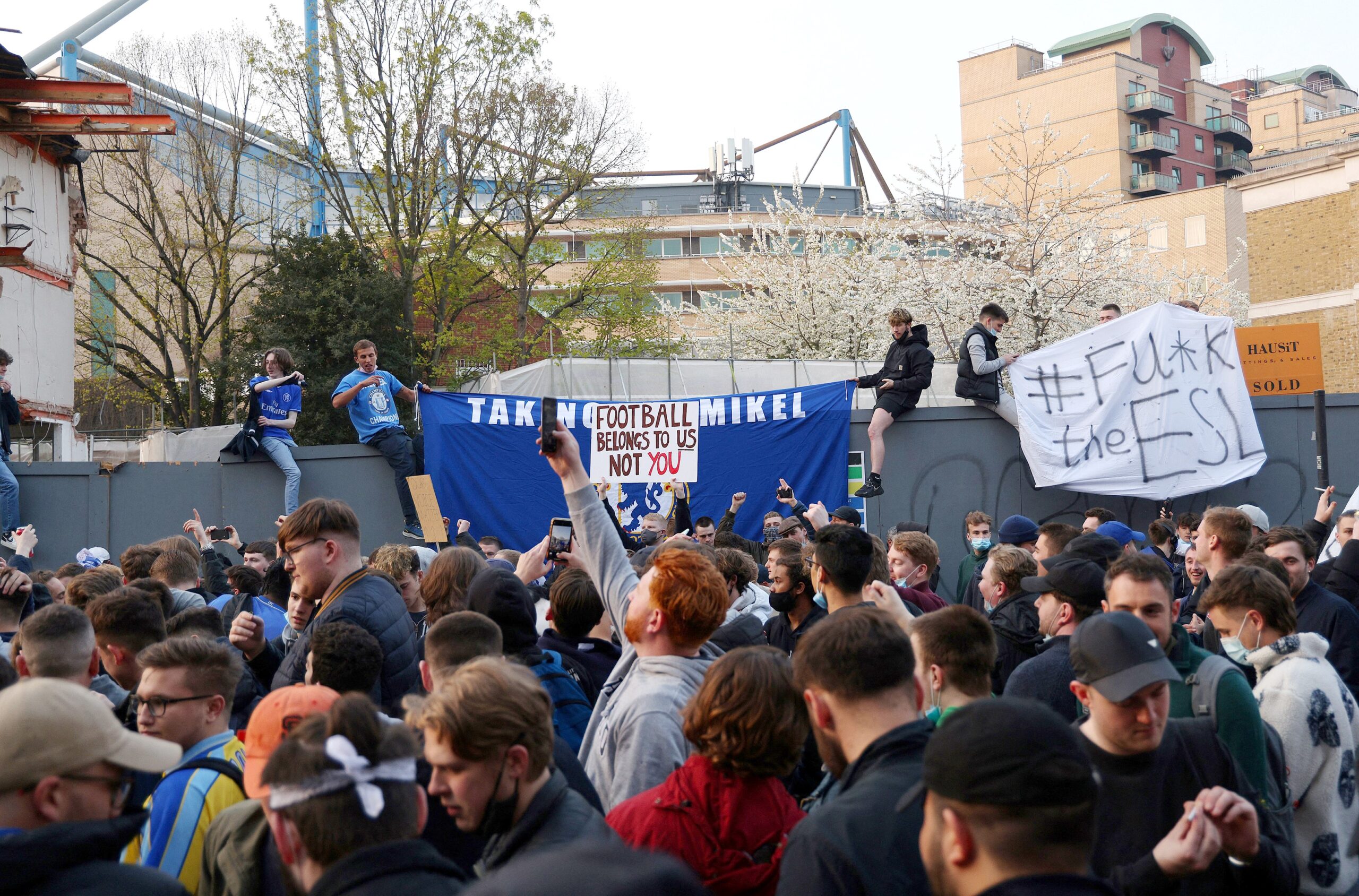 The European media, politicians, and fanatics a.k.a fans, all went ballistic after the announcement of the formation of the European Super League (ESL) by 12 of Europe’s largest and most powerful football clubs. This is perhaps the most appropriate metaphor to use to describe the conjoint reaction stated above since the clubs had triggered the “nuclear” option.

The harshest criticisms were that the ESL would have been a closed shop, the clubs have put money above all else, and it would deprive lesser clubs of revenue.

British opinion writers were furious as they saw the ESL with its closed shop approach as destroying the romanticism of the game. The prospect of neither promotion nor relegation is an existential sporting crisis. Upward sporting mobility for small clubs will not only no longer be possible but will no longer be even a dream.

Large doses of vitriol were spewed by the British press, the fans and even the UK Prime Minister on the Big Six English clubs which had signed on for the ESL: Manchester City, Manchester United, Liverpool, Chelsea, Arsenal and Tottenham Hotspur were shellacked.

But what are the facts?

Forbes stated the following as its methodology:

“The franchise values are based on Forbes’ published valuations during the past 14 months, with additional reporting by Mike Ozanian and Christina Settimi. The most recent soccer valuations were published in May 2019. Team values reflect enterprise values (equity plus debt). No teams from the NHL, Nascar, MLS or Formula One made the top 50. The highest-ranking franchise outside the NFL, the NBA, MLB and European soccer, was hockey’s New York Rangers, at 70th, with a value of $1.65 billion.”

So, apart from Real Madrid, Barcelona, and Manchester United there are no other football teams from the world’s truly only global sport in the top 20 most valuable sporting teams in the world. The NFL, NHL, MLB do not represent global sports. Only football does!

Professional sports are a business. The same principles that one learns in business school are to be applied to the management of a professional sports team or league. ROI, ROE, positive cash flow, net profit attributable to shareholders, risk minimisation or avoidance are all very important metrics for the business of sports.

Why should an owner invest billions of dollars in a team, to risk it being wiped away after one bad season and the team is relegated to a “lower division” where basic costs cannot even be met?

I became a fan of Liverpool FC in 1970. I have remained loyal. At that time Derby County was also in the First Division. It played at the old Baseball Ground. It now plays in the EFL Championship and is currently 21st. As to Bolton Wanderers, Bibi Gardener’s old team, it is in League Two [ the old Fourth Division], a long way from the Premier League and was recently on the brink of extinction as it was in administration. Such are the perils of relegation and a lack of funds.

Romanticism, as emotionally powerful as it is, respectfully, is for amateur sports. It has no place in pro sports. My NFL team, the Chicago Bears, has not won a Super Bowl since 1984. Yet, it is in the top 20 most valuable sports teams [ valued US$3.45 billion]. In the period 2019 to 2020 Liverpool FC won the European Championship, The Premier League, The World Super Cup, The World Club Championship, yet it cannot make the top 20 most valuable sports teams in the world.

Investors in sports teams have other investment options.

If professional football does not create a business model that minimises the inherent investment risk (relegation) and maximises value inclusive of profits, football will become an also ran in professional sports. There will be many more Bolton Wanderers!

The ESL has now collapsed. The Big Six English clubs, under tremendous pressure bordering on terrorism from the fans, a hostile media, English politicians of the highest order and so-called pundits, have all meekly lapped their collective tails, withdrawn from the ESL, and issued seemingly sufficient mea culpas. They were swiftly followed by another three continental clubs.  The Premier League and UEFA will issue sanctions and the world will move on. But will it?

The fundamentals of the business have not changed. The flawed business model continues. There are no adequate returns on capital, the bulk of the income earned by the clubs is used to pay outlandish wages and transfer fees, a salary cap does not exist, and ticket prices are ridiculously low. (There is a booming market for the re-sale of tickets at prices ranging from 4 to up to 10 times the face value of the tickets). The huge risk in the business model is still there. Readers should note that since 1992 there have been 45 insolvencies in English football clubs, 40 in French clubs and 30 in German clubs. Owners are required each year to inject substantial capital to buy new players in order either to “stay up” if you are for example, in the Premier League, or in a lower league to gain promotion. There are no real profits for suitable investors. The only persons/ entities who will invest are those seeking bragging rights, oil sheikhs, oligarchs, and Petro-states. Meanwhile, the fans are happy, the players are happy and European football continues its slow death march.

Could someone please explain why one of the greatest English footballers of my generation, David Beckham, has not invested in an English club, but is a part-owner in the new MSL expansion team known as Inter Miami? Does he know something about the English and European football structure that his countrymen and continentals do not appreciate?

One thought on “Professional Football: Business Or Sport?”