Ah, Just Words, Nothing To Worry About; Really? 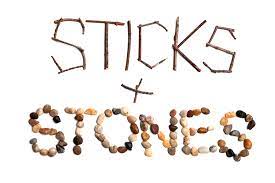 The saying “Sticks and stones may break my bones, but words shall never hurt me” has been uttered by children for generations. Parents and grade school teachers, in an attempt to pre-empt fisticuffs or to prevent anything far more serious resulting from inevitable childhood playground taunts and backyard squabbles, were the ones who taught and then reinforced the assertion made by such a saying.

But, though it has the sound of a truism, does it, in fact, comport with and, hence, prepare children for the turbulences of real life? And yet, that having been said, many wars began on the cusp of heated words. Spies have died because they would not talk. The silence of witnesses has both saved and ended lives. There are laws of all kinds governing the usage of words by citizens in various societies and between nations.

There are laws dealing with libel, laws holding people accountable for perjury, laws protecting freedom of speech and the press, and laws governing the business conduct of telecommunications conglomerates. If “sticks and stones” or other physical substances which can be fashioned into various kinds of weapons pose the only real threats to mankind — existential or otherwise — why then, for example, did a federal court jury in Nevada deliver a unanimous verdict awarding US$38.3 million to a business owner in his successful claim for Internet defamation and false light invasion of privacy in February 2016?

Why then was the previous administration so up in arms about alleged “fake news” coming from the news media and harped on it constantly? Why did its Justice Department illegally break into e-mail accounts to read the words of public figures and journalists deemed as threats to the administration? Why all the hullabaloo about the alleged teaching of Critical Race Theory — a highly technical legal discourse — in our schools?

Why have social media executives been called unto the carpet, in recent times, to testify before concerned members of Congress in respect to the policies and procedures of their companies as far as their impact on society are concerned? Why are radio and television stations considered valuable spoils of war by insurgents in coup d’etats?

Facebook has come into the spotlight again, not just about the threat posed by its so-called “algorithms” which were designed to secure and to expand its patronage in order to increase its profit margins, but questioned also as to the role it played in facilitating the insurrection of January 6, 2021 in Washington, DC. A former Facebook data scientist, Frances Haugen, testified before the United States Senate and the European Union about the threat that the company poses to world security. She is the latest in a line of whistle blowers to speak out against the Mark Zuckerberg-led media juggernaut. For mere puffs of air and nonsensical hieroglyphs — words, nonetheless —  continue to create and to channel great currents of history.

The estimated expenses of newspaper publishers in the United States in the year 2010 was a cool US$30.49 billion. People have, ostensibly, been investing huge sums of money into companies of that ilk for decades. Such companies rival those whose business is about the production of oil, of steel and of weapons. Investors reap many more tons of cash upon their investments all because of these mere harmless and insignificant metaphysical “constructs,” which fall outside of the pale of the matrix of “sticks and stones” — a loose and threadbare philosophy which has been asserted to possess far more power to inflict harm or to do good than words.

It is projected that digital advertising will increase by more than 100% between 2019 and 2024. At the end of that period the industry is projected to earn US$278.53 billion. And so, contrary to the farce foisted upon the impressionable minds of children, words are not only powerful but extremely expensive. So much for “sticks and stones.”

Having put to rest the childish myth of the impotence and vapidity of words, this discussion now takes a turn down a path in respect to the dangers posed by the devaluation of words, especially those born of noble stock and which bear the stability, the hopes and the dreams of any society like Atlas with the weight of the world upon his shoulders. If words, like salt — especially those which represent the best of us, or which can inspire us towards something greater than ourselves — have lost their efficacy, wherewith shall they be salted? With noble words was this nation launched. With noble words has it been defended and held together in brotherhood. With noble words was a course set for its destiny as an example of democratic ideals for the world.

Millions of man hours have been spent and great volumes of blood spilt in this grand effort. But America’s idealism, crafted so eloquently in words by its founders, has been hit by a deflation of conviction and of will, perhaps rivalling that of the seismic tremors of The Great Depression in the economic world.

The oath to support and to defend the U.S. Constitution and to faithfully execute their duties is taken by Federal officials, including the President of the United States, the Cabinet, people in lower rungs of the government bureaucracy, members of both Houses of Congress, members of the judiciary, and members of the armed forces when they assume office. People in such positions of great fiduciary responsibility often violate their oaths of office and are, usually, held accountable for their actions. But in recent times there has been a wholesale eschewal, a brazen mockery, a casual indifference and a callous disrespect for the words contained in the Constitution.

This mass defection within the highest echelons of government seems to be metastasizing throughout the length and breadth of the country at shocking and alarming proportions. Outside of the violence of the insurrection of January 6, 2021, which many officials support, their obfuscation of truth is a betrayal of the principles that many suffered and died for on the beaches of Normandy in 1944.

The nation, ostensibly, is on the brink of a moral implosion. The flagrant abuse of words, of the values of their precise meanings, and of their correct usages by many of our leaders, who were taught to cherish them in the great and prestigious law schools across this country, are fast diminishing in their moral and political capital, especially with respect to the Constitution. In so doing they have significantly lessened the buying power of a document and of its democratic standards which have been used as legal tender and promissory notes for purchasing international amity and comity under the great seal of American democracy. The real domestic threat was never from the great arsenals of guns kept by mad men, and not even from the events of the bloody Civil War nor of those of January 6th, but from the excoriation and the diminution of the ideals which got us this far in time, and which have kept us this long by, ironically, our “law makers.”

The selfishness of silence will deafen and destroy with the same effect as the din of deception. Whereas the word of the noble is ever his bond, that of the feckless is as a putrid stream under a neglected foundation. The spirit of Machiavelli and of Hitler are still alive. “Sticks and stones,” no matter how formidable, are primitive products of a higher order. Hence, they are no match for the subtle devilry of the architecture of words. If the good book is correct, and this writer believes that it is, it was falsehoods which brought down the grandeur of creation. And, so, what then of the less august empires of men?

Wake up, America and rediscover your roots.